How Art and Beauty Can Teach Us About God, and About Ourselves

Beauty is not just esthetic. Beauty is a bridge which invites us to be the best version of ourselves. Each experience of beauty begins an invitation to a better life and reminds us what God wants for us in our lives.

"Windows to Heaven" A series of presentations that will explore the history of Christian Art,  it’s connection to the liturgy, and why it should matter to my life.

Register for the entire series for $210 per person

Schedule for Each Session

Register for the Entire Series for $210 per person.

Each session will be led by Fr. Vito Crincoli, LC, Director of the Leadership Training Program 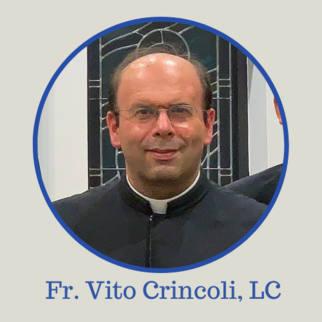 Fr. Vito entered the Legionaries of Christ at Immaculate Conception Apostolic School in 1993 at the age of thirteen. He did his Novitiate and Humanistic studies at the Legionaries of Christ Seminary in Cheshire Conn. In the year 2000 Studied Philosophy from 2000 to 2002. In 2002 Father was sent to work with youth in Mexico. In 2006 Father returned to Rome to do Theology and was ordained to the priesthood on December the 12th 2009. He returned to Mexico to continue his ministry among young people through chaplaincy and mission work in schools. Father returned to Room in 2019 to study a license in Spiritual Theology, especially in the field of Liturgical art, iconography, and the theology of the Saints. He is now the current director of the Leadership Training program here in Washington DC.